Dr. Anna Kaltsas talks about how lucky she considered herself to be a student at an international school like ACS Athens and how that experience helped her prepare for a career in medicine. She urges ACS Athens students to value these experiences while they have them and know that they are setting them up for a lifetime of interactions. (Original Score by Aris Tombros)

Are you interested in a mentor Q&A webinar by Dr. Anna Kaltsas? 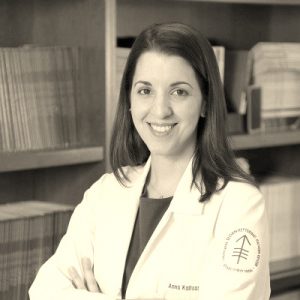 Dr. Anna Kaltsas was born in New York but lived her formative years in Athens, Greece, where she attended ACS Athens from first grade to 12th grade. She pursued a double Biology and English major at Drew University and received her medical degree with honors from Albany Medical College in 2004. Following that, she moved to New York City to complete her internal medicine residency at New York Presbyterian – Weill Cornell hospital and further infectious disease training (fellowship) at Albert Einstein College of Medicine and Montefiore Medical Center; she also received a master’s degree in Clinical Research during her time there. She has since dedicated her career to the care of complex infections in cancer patients as well as to the training of medical students, residents, and infectious disease fellows, among others. Dr. Kaltsas is grateful to her parents for moving her back to Greece at a young age to better appreciate her Greek heritage and to attend ACS during some of the most important years of her life. She credits ACS for granting her the tools to embark on a career of scientific discovery and giving back to others and extends her immense thanks to the teachers who paved the way then for her to become the physician she is today.