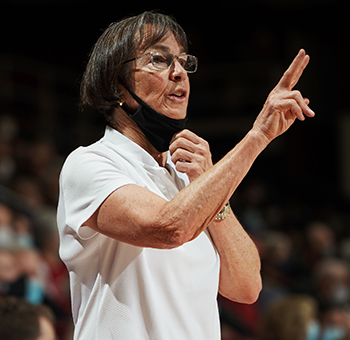 Coach VanDerveer is the all-time winningest coach in women’s college basketball. She has been a member of both the Naismith Memorial Basketball Hall of Fame (2011) and the Women’s Basketball Hall of Fame (2002) and is considered one of the top coaches in the history of the sport. She is an icon not only in college but internationally as well as she has also coached the USA Basketball National team winning a gold medal in the 1996 Atlanta Olympic Games with a remarkable run of 60 consecutive wins.

On December 15, 2021, she became the sport’s winningest coach, breaking Tennessee’s Pat Summitt’s mark of 1,098 wins. Stanford finished the year 31-2, winning both the Pac-12 regular-season and tournament championships, earning the No. 1 overall seed in the NCAA Tournament, and claimed the national championship for the first time since 1992.

Overall, many of her players have earned collegiate awards, All American Honors, Player of the Year awards, and many of them have moved on successfully at the professional level. Stanford has had 30 players play in a regular-season WNBA game since the onset of the league, with 12 first-round draft picks out of its 27 all-time selections, including 2016 WNBA MVP Nneka Ogwumike, and has had seven players win a total of eight WNBA titles.