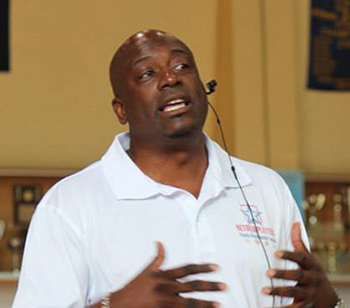 Sam Vincent is a retired NBA player and a coach.  As a player, he played for Michigan State and was drafted by the Boston Celtics where he won an NBA championship.  His playing career included Chicago Bulls and Orlando Magic.

He has had a number of coaching “stops”; in the international scene, he has coached in South Africa, Greece, Netherlands, and Nigeria. Shortly after coaching the Nigeria Men’s team to the second round of the 2006 World FIBA Championships (including a shocking upset of traditional power Serbia and Montenegro), he was hired as an assistant coach by the Dallas Mavericks.  In 2007, he became the Head Coach of the Charlotte Hornets.  After his tenure with the Hornets, Vincent was named the head coach of the Anaheim Arsenal of the NBA Development League