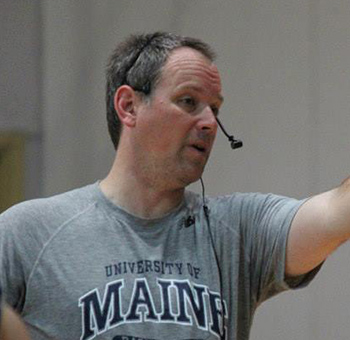 Coach Barron through his coaching career has had success at top quality Division 1 universities.  His experience includes North Carolina State, Baylor University, and Princeton University. During his tenure at Baylor, the team won the conference championship and has two NCAA post-season appearances, reaching the sweet 16 round.  Barron posted a 77-48 record during his tenure at Princeton while coaching five different players to All-Ivy League honors. In his early years as a coach, Barron was the assistant men’s coach of the University of the South in Sewanee, Tennessee for four years.  Barron is well renowned for his fantastic recruiting and “finding talent”.  Barron comes to the University of Maine with an 11-year head coaching career record of 152-139.

In the summer of 2006, Barron looked to expand his coaching knowledge as he traveled to Treviso, Italy with the NBA’s Phoenix Suns to observe and study under Mike D’Antoni.