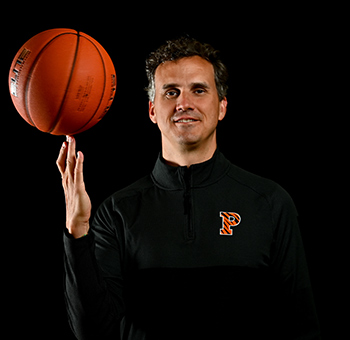 Mitch Henderson is the third-winningest coach in the history of the Princeton University men’s basketball program. Under his coaching and guidance, ten Princeton alumni have gone on to professional careers, including Devin Cannady ’20 who played eight games for the Orlando Magic in the 2020-21 season and was the NBA G League MVP with the Lakeland Magic.

In 2017, Henderson led his team to the NCAA Tournament and a first-round near-upset of 14th-ranked and fifth-seeded Notre Dame. The 2017 season saw Henderson win Ivy League Coach of the Year honors for the first time in the third year of the award.

While maintaining Princeton’s place as an annual contender in the Ivy League, Henderson has challenged the team out-of-conference, playing teams such as against Duke, Syracuse, North Carolina State, Florida State, Pittsburgh, Maryland, Miami, USC, Arizona State, and Indiana.
Henderson returned to Princeton as the program’s head coach on April 20, 2011, following 11 seasons as an assistant coach at Northwestern under his former coach at Princeton, Bill Carmody.

As a player at Princeton Henderson has had many moments of success during his collegiate career and has earned many honors and awards.