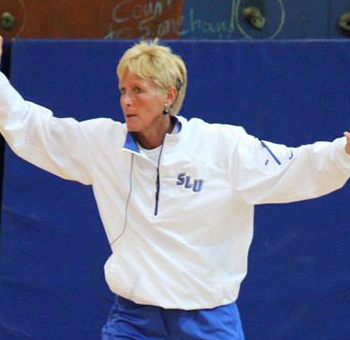 Lisa Stone, in 27 years as a collegiate head coach has a remarkable 515 – 256 record. This is her second year at St. Louis University and prior to her arrival at Saint Louis, Stone served eight seasons (2003-11) in charge at Wisconsin. She began her head-coaching career with a three-year stint at Cornell (Iowa) College, spent 12 seasons at Wisconsin-Eau Claire, and had a three-year tenure at Drake. Throughout her career, she has had a number of NCAA post-season appearances; in 1997 she was the WBCA Division III National Coach of the Year, and in 2000 she was named D3 News/Molten Division III National Coach of the Year. In addition to her collegiate coaching experience, Stone was a head coach in the 2001 WBCA All-Star Game as well as an assistant coach for gold-medal-winning Team USA at the 2002 World Championships for Young Women Qualifying Tournament in Brazil.