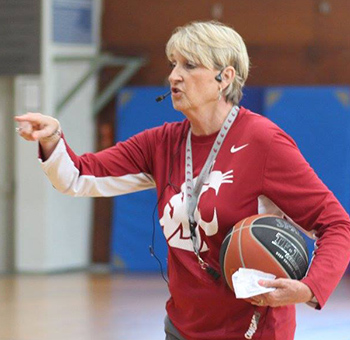 June Daugherty, former Coach at Washington State University, came to us with 28 years of coaching experience. It was her 10th year at Washington State and before that she was at the University of Washington for 11 years and Boise State for seven years. Prior to her head coaching positions, she served as an assistant coach at Stanford under head coach Tara Vanderveer. She has coached more than 800 games with an overall record of 425 wins – 401 losses and has 8 NCAA post-season appearances. She has many years of experience working with WNBA-caliber talent; Daugherty is a member of the Women’s Basketball Coaches Association and is a former member of its Board of Directors