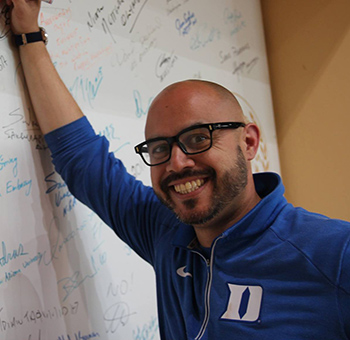 Hernando Planells was the assistant coach of the Women’s Basketball program at Duke University.  He coached the guards and was also the recruiting coordinator for the Duke Blue Devils.

Planells has one of the most diverse backgrounds in basketball (both coaching and player development), leadership training, and film production. He has coached at every level including time with the Boston Celtics NBA Development League team the Maine Red Claws.  As an assistant coach, he was in charge of player development, scouting and did on-court coaching.  He helped develop Boston Celtics No. 1 draft pick Avery Bradley and NBA D-League Rookie of the Year DeShawn Sims. Planells has also coached professionally and worked with programs all over the United States and in countries such as Japan, the Philippines, Australia, Switzerland, and Taiwan. In 2011, he founded ELITE athlete training, which specialized in personal training and consulting services for athletes. Through his work with ELITE, he trained and assisted over 100 athletes to reach their goal of gaining a college scholarship or playing professionally.

For a number of years (2005-10) Planells served as an NBA scout for Marty Blake, who is the Director of Scouting for the NBA.  Planells also runs Always Be Contagious, an organization that provides leadership, communication, and culture training and support for sports programs, businesses, and individuals all around the country.  His work on the court led him to the “big screen” where he choreographed and consulted on the basketball scenes and training the actors on movies such as “Coach Carter”, “The Longest Yard”, “Rebound”, “Spider-Man 3”, “Semi-Pro” and others.