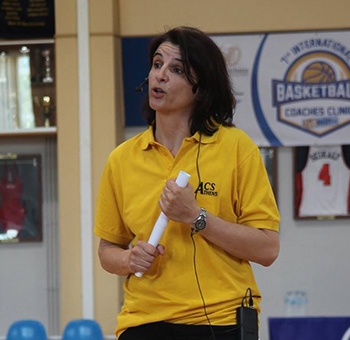 Eleni Kapogianni has had a long career in basketball in Greece. As a player, Eleni has won 6 Greek Championships and 5 Greek Cups with the legendary team of Sporting Club.  She also participated in one Final four of the European Championships as well as in the Liliana Ronchetti cup with the team of Aghia Paraskevi and Liosia.  She was also a member of the Greek National team.

Her coaching career began in 2006 and since then she has been the assistant coach of a number of women’s teams as well as the head coach for division 1 women’s clubs.  She has won 2 national championships and 2 National cups with the team of Elliniko for the Greek Women’s A1 League.

Since 2006, Eleni has been involved with the National Association of Basketball coaches and since 2014 she was elected on their Board.