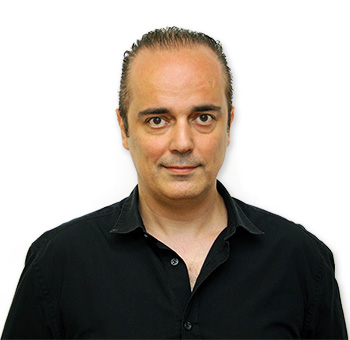 Dr. Evangelos Syropoulos holds a BA in English Language and Literature (1995), an MA in English Literature and Culture (1999), and a PhD in Musical Theatre (2008) from the School of English of Aristotle University, Greece. He conducted postdoctoral research and/ or taught drama/ theatre courses at Aristotle University, Ghent University (Belgium), and Goldsmiths College (University of London). His research has been published in peer-reviewed journals in Greece, Belgium, and the UK. He is also a College Board-certified AP Capstone teacher, receiving his training at McBride High School, Long Beach CA, in 2017.

This is his fifth year at ACS Athens. For the last four years, he worked as Writing/ Research Studio Coordinator and additionally taught IB English A: Literature, IB English A: Language and Literature, IB Theory of Knowledge Senior Seminar, and Film Writing/ Production. He also co-coached the ACS Athens Academy Duet Acting team for the Panhellenic Forensics Association Tournament and participated in the Mentor Program and the New Colleagues Mentor Program.