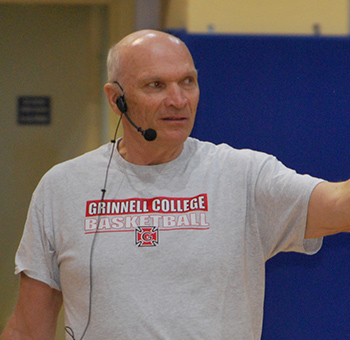 After 29 years at Grinnell College, Coach Arseneault has become nationally and internationally renowned for his innovative coaching techniques and offensive-minded basketball.
Known for full-court pressing and three-point shooting, his teams have led all playing levels in scoring and 3-point shooting for 20 of the past 24 seasons. He invented the Grinnell System (sometimes referred to as The System) a run-and-gun fast–tempo style game.  The Grinnell System relies on shooting three-point field goals, applying constant pressure with a full-court press, and substituting players frequently.