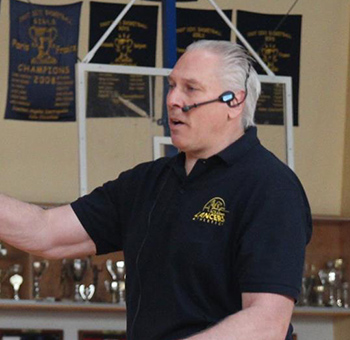 Chris Daleo is in his first year with the Rochester Razorsharks with an extensive career in the pre-NBA professional leagues as well as the international basketball scene. He has been described as a “basketball genius” by a journalist and it is quite a surprise that he has not moved up to the NBA league by now.

He has been the Head coach of the Champaign Swarm, the Minot Skyrockets, and the Rockford Lightning.  He was named CBA Coach of the year a number of times and has a remarkable winning game record.  His international experience is also noteworthy: involved with the El Salvador League, the Korean Basketball League, Head Coach of one of eight teams in the Treviso Summer League, Treviso, in Italy (2006), Head Coach of U.S. team on a tour of China (2004, 2005 and 2006). In addition, Chris Daleo held management positions (General Manager, Deputy Commissioner of the CBA, College Athletic Director) throughout his coaching years.

Coach Daleo has successfully worked with young players, from the college scene all the way to the professional leagues.